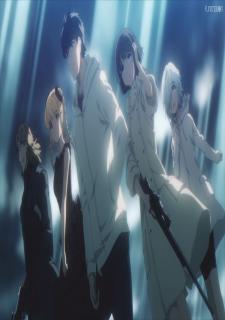 Secondary school understudy Kaname Sudou gets a greeting from a schoolmate to play Darwin's Game, a portable game he has never known about. Be that as it may, when he opens the application, a green snake unexpectedly jumps out from his telephone screen and chomps his neck, leaving him oblivious. Awakening in the clinic with no indications of a snake chomp, he is advised by the school to go home and relax. In spite of the fact that he is perplexed by what has occurred, he excuses the dreamlike experience as a mind flight and loads up the train home. Tragically, his interest improves of him and he utilizes the application by and by. As the application seems, by all accounts, to be much the same as some other fight game, Kaname inhales out a moan of help and chooses to begin his first match. In any case, the wonderful amazement is fleeting, as his in-game rival startlingly shows up directly before him and endeavors to chase him down with a blade. As he frantically runs for his life, Kaname comes to an obvious conclusion and understands that Darwin's Game is certifiably not a customary game, but instead, it's a merciless battle for endurance.