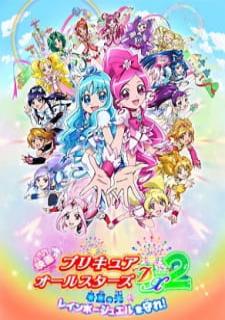 Tsubomi Hanasaki is woken by her best friend Erika Kurumi only to find out that their two fairies, Coffret and Shypre, have left just leaving a note explaining where to find them. Fairy Park is not only the destination of both girls, it is also the meeting point of all other Precures who planned to spend this special day together. This magical theme park holds the Rainbow Jewel, a special gem that represents all of the hopes and dreams of the world. Such a powerful stone is the object of desire of a malefic entity named Bottom who has waited one thousand years for the opportunity to possess it.