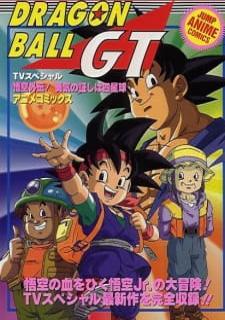 Years after the end of the Dragonball GT, the story continues in this special with Son Goku's now eldery granddaughter Pan, and a new generation of super saiyajins, the great-great-grandsons of Goku and Vegeta
100 years after the end of DBGT, all the heroes of Earth have died...except for Pan, the granddaughter of Son Goku. Pan has a grandchild named Goku Jr. However, he does not have the bravery of his great-great-grandfather. Pan suffurs a heart attack, and Goku Jr. believes that he might be able to save her with the power of the 4 star Dragon Ball. Along with the school bully, he tries to find the ball...and unleashes his hidden bravery and power.